This is a continuation of my side project to take pictures or collect photos of all the Welsh football grounds in the top six tiers, and then turn them into a sticker style format. Initially this was something I just did to test out my Photoshop skills, but considering the popularity it achieved on Twitter and Facebook, I decided to expand it and try to encompass the whole of the country – a big task!

Anyway I have decided to group the grounds into their respective Welsh counties, so the seventh county I have done is the large central Welsh county of Powys.

Powys is the largest of the Welsh counties, stretching the length of the country from the borders of Denbighshire and Wrexham Borough County, to the South Welsh valleys. As a result, a large number of teams compete within the county. For this reason, I have decided to split the huge county up between the three sub (or historical) counties – northern Montgomeryshire, central Radnorshire and southern Brecknockshire.

Montgomeryshire is the most populous sub-county of Powys, in terms of population and teams. There are currently 28 teams playing at 26 grounds within Montgomeryshire, with Newtown AFC being the highest placed of these, playing being stalwarts within the Welsh Premier League. Guilsfield and Llanrhaeadr-ym-Mochant currently play within the Cymru Alliance, whilst additional Montgomeryshire sides compete within the Mid Wales League (which occupy the third and four tiers in central Wales football). The fifth and sixth tiers of the pyramid are occupied by the local Montgomeryshire League, who acts as a feeder league for the Mid Wales League, and covers northern Powys. 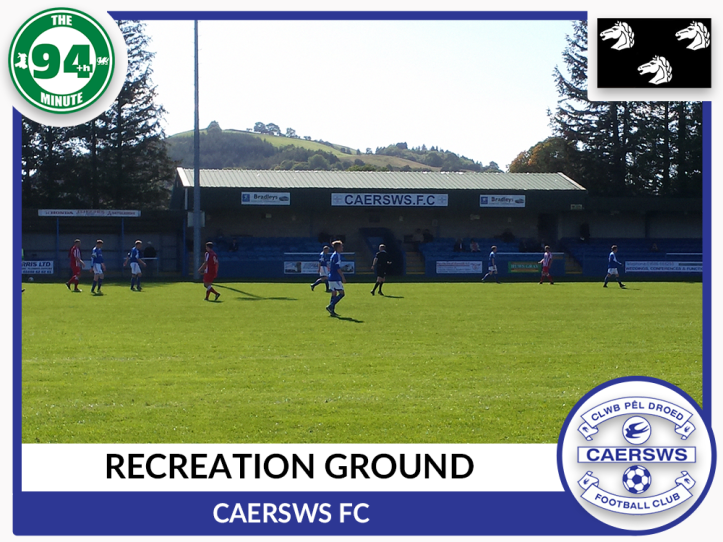 Brecknockshire is the sub-county with the fewest teams competing within the Welsh football pyramid this season with only five teams. The highest placed side is Builth Wells who compete in the Mid Wales League Division 1 (third tier), with Hay St. Mary’s in Division Two (fourth tier), and Brecon Northcote and Talgarth Town playing in the fifth-tier Mid Wales (South) League.

There are three exceptions; Brecon Corries, Cwm Wanderers and Ystradgynlais FC, who unlike the other four sides, do not play within the “northern” football system. Because of the close proximity of the South Welsh Valleys, the Corries play within the South Welsh football system. This season, they are playing in the South Wales Alliance Premier Division, a feeder league to the (South) Welsh League system, and positioned at the fifth-tier of the Welsh football pyramid. Whereas Cwm Wanderers and Ystradgynlais currently play in the fifth tier Neath League Premier Division, which is focused around the Swansea-NPT area of South Wales.

There are currently four sides who are based in England, but play within the Welsh league system due to them being within close proximity to the Welsh-English border. The most famous of these clubs is The New Saints, who are based just outside of Oswestry and are the current Welsh Premier League champions. However there are also Newcastle FC, Bishops Castle Town and Trefonen FC who compete within the Mid-Wales system of the Welsh football pyramid. Because all four sides play (or have played) in the Mid-Welsh leagues, I have added them to the Powys sticker album.

After being away from the place since early March 2020, it was brilliant to be finally back at Halkyn Road to watch Holywell Town.
Managed to find the @fawales plinth in honour of @harrywilson22 at Basingwerk Abbey 😊👍🏻
Loading Comments...
%d bloggers like this: